IS SS EVEN REAL? 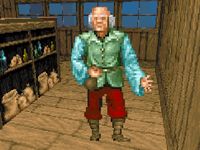 Pictured: The Daggerfall merchant from The Elder Scrolls II: Daggerfall by Bethesda Softworks

Is this really just ss013r from yesteryear?
I believe this to be the case.

The Daggerfall merchant, or ss013r as he is called today,
was a lonely NPC shop keeper found within
the many towns and cities of the Daggerfall province.

ss013r, having grown increasingly aware of his digital surroundings
and having crafted the idea that his world may collapse at any moment,
hatched a plan to escape his coded prison.

In 2005, the merchant combined the power of every physical copy of the game
and transmuted himself into the outside world. Upon doing so,
the machine-made-man had to acclimate to modern society, and so while
adjusting to his new physical reality, he crafted a few online profiles in order to further blend
in. He was known as Mike013R when he was first spotted. He's since changed
his alias to that of ss013r and has even forgotten his own past. He blends in perfectly,
completely unaware of his own past-being and even taking on many delusions of false memories.

Below is a picture of ss013r, taken just weeks ago.
See the similarities?